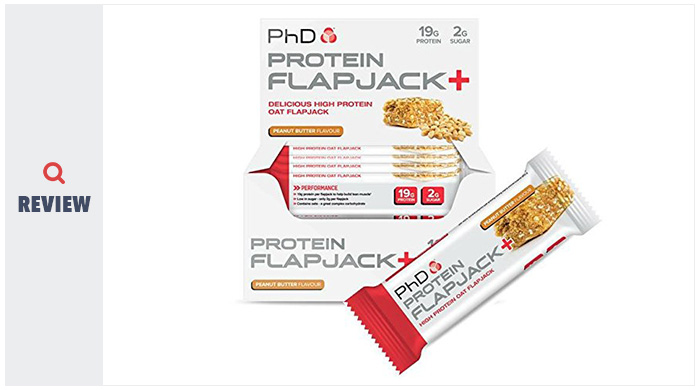 A protein flapjack, sounds like a gimmick, doesn’t it? Let’s see if it is…

Athletes, bodybuilders and anyone on an intense exercise regime will seek to add additional protein to their diet, especially if they want to build and maintain muscle. Protein can help replace damaged muscle tissue, build new muscle and aid recovery from workouts, helping us to work hard the next day and the next day until we reach our goals.

Many athletes swear by protein shakes, but others find them hard to digest, unpalatable and sometimes simply too much to drink. PhD Nutrition offers an alternative solution… the protein flapjack. As well as keeping your protein count topped up throughout the day, says PhD Nutrition, you can also take it with you on a bike ride or a long walk and avoid going catabolic.

The PhD Nutrition Protein Flapjacks contain 19g protein and 37g of carbohydrates per flapjack, alongside 2.5g of fibre. They only contain 2g of sugar and less than 3g of saturated fat per flapjack. They are available in three flavours – peanut butter, apple and raspberry and forest berries.

It’s important not to forget carbohydrates if you want to bulk up and train intensely. Carbs provide the body with energy and a healthy supply not only allows for better exercise, but prevents the body breaking down protein for energy instead.

The carbohydrates in PhD Nutrition Protein Flapjack come in the form of oats, namely rolled oats and malted oats.

Oats are complex and slow-burning carbs, and one of the best ‘go-to’ carb sources around, according to Muscle Building Foods.  As well as providing a good amount of complex carbs and protein, oats also provide muscle-building relevant nutrients such as iron and niacin, as well as fibre and further vitamins and minerals.

When you’re choosing a protein bar, it’s important to look at the carbohydrate sources. Too many protein bars are high in high-fructose corn syrup, and you should ideally avoid these. PhD Nutrition Protein Flapjack uses oats instead and so is a better source of carbohydrates for you.

Note that if you want to lose weight, a bar with such a high carb count will not be the best choice for you.

Unless we missed it (and we looked, oh how we looked), the official PhD Nutrition website doesn’t specify exactly which form of milk protein is used in its protein flapjacks. However, its Amazon page seems to think it is milk protein isolate, so we’ll assume that’s correct.

Hydrolysed gelatine: Gelatine is a type of protein gained from animal connective tissue and contains the amino acids, proline and glycine. However, it’s actually a pretty poor form of protein for muscle building because it is very low in Brand Chain Amino Acids (BCAAs) or leucine, valine and isoleucine. These BCAAs are very influential in protein synthesis and muscle growth and cannot be made by the body, unlike the amino acids in gelatine.

As such, this is a pretty pointless form of protein for a protein flapjack intended to aid athletes and others with muscle mass. It also falls foul of many vegetarians as well, who will not eat anything made with gelatine.

PhD Nutrition Protein Flapjack also contains whey protein concentrate, though as it is listed third on the protein blend, we can assume it is a minority of the protein blend. This is a shame as whey protein is one of the most popular protein choices, thanks to its ability to trigger protein synthesis, the key to muscle building, as quickly as 40 minutes after ingestion.

Whey protein concentrate can include anywhere between 30-80% of protein.

An important note: According to Bodybuilding.com, a key consideration when choosing a protein bar is its protein to carbohydrate ratio. If you’re looking for weight loss, you should opt for a 2:1 ratio of protein to carbs. That’s NOT PhD Nutrition Protein Flapjack, which has 19g protein and 37g carbs.

However, if you want to build muscle or use it for post-workout, a 1:2ratio, such as in PhD Nutrition Protein Flapjack, is ideal.

PhD Nutrition say the protein flapjack is suitable for endurance athletes, strength athletes, athletes who seek to gain muscle mass, athletes who want a high protein snack which is also high in complex carbs, and finally anyone who wants a healthy snack rich in nutrients. So, lots of people then!

The manufacturers recommend eating two PhD Protein Flapjacks a day to support a high protein diet. You could opt for it as a pre-workout or post-workout snack, or as an alternative to breakfast or a mid-morning snack.

There were no obvious safety issues or side effects complained about by the majority of Amazon reviewers.

The real benefit of a protein flapjack is in its convenience. It’s much easier to pop it in your gym bag or take it with you on a long bike ride than a protein shake, ready to eat too. Most people agree that these flapjacks are filling and will satiate your appetite for an hour or two.

While the quantity of protein per flapjack in PhD Nutrition Protein Flapjacks isn’t very high, eating two a day will give you a decent protein boost. Anyone wanting to lose weight or carefully watching their carb count, however, may want to give PhD Nutrition Protein Flapjacks a miss, and opt for a protein flapjack with fewer carbohydrates instead.