Fat Burners aren’t miracle pills; they won’t melt away the pounds or kilos if you don’t put the work in. BUT they can be an extremely powerful aid in your diet and exercise regime, and one that could mean the difference between reaching your target weight or falling short.

An effective fat burner will work on several different levels:

Why Do You Need a Fat Burner?

You don’t need a fat burner, but why wouldn’t you try one? Especially if it makes sticking to your diet and exercise regime that bit easier and leads to improved weight loss at the end of the day. Missing out on a fat burner could mean you lose more muscle but less fat and struggle with your workouts along the way.

Ideal Ingredients in a Fat Burner

There are a few proven ingredients that we like to see in a fat burner. They include:

HMB – a leucine-metabolite (that is at least 20 times more potent than leucine itself) that helps to preserve muscles. Fasting and weight loss tends to also cause muscle loss which is what you don’t want as it impedes your workout performance and lowers your resting metabolic rate (the number of calories your body burns while at rest). HMB can prevent this.

EGCG – a green tea extract that contains a potent amount of catechins. These are very useful for weight loss because they encourage the body to breakdown fat as opposed to using muscle proteins.

Optional – Caffeine: A classic fat burning compound due to its anti-fatigue and calorie burning properties. Make sure you keep below the 400mg a day recommendation. You don’t necessarily need caffeine in your fat burner, however; indeed many inferior products cram products with caffeine to hide the fact that they don’t offer much else.

There are several superior non-stimulant fat burners on the market, including our favourite Performance Lab Sport Burn… 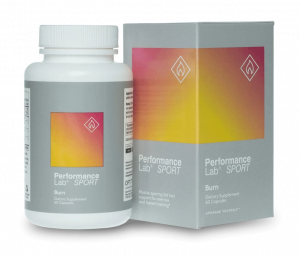 Ideal For: Fasted training, thanks to its ability to promote lean muscle mass. Pledges to burn more calories and fat than exercise alone.

We are huge fans of Performance Lab SPORT Burn. Its ingredients work well in synergy to trigger thermogenesis, boost exercise and gym performance, and help you retain your lean muscle mass. It’s an effective choice for anyone wanting a stimulant-free all-natural fat burner. 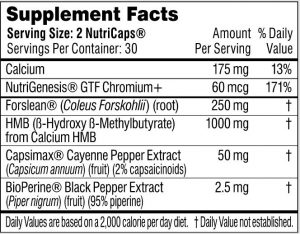 HMB, 1000mg: A ‘child’ of the BCAA leucine, HMB is an effective ingredient for preserving muscle mass. This is particularly important when fasting while training as muscle is often degraded during this time. HMB is considered much more powerful – 20 times as much – than its parent leucine.

Capsimax®, 50mg: This cayenne pepper extract encourages the production of hormones to raise the metabolism and body temperature, helping to burn fat. Crucially, it does so without any negative effects on heart rate or blood pressure.

BioPerine, 2.5mg: This black pepper extract is known to promote the absorption of other ingredients in the formula, rendering them more effective.

PLUS, Calcium (175mg): Calcium, of course, helps to maintain strong bones but it has also been shown to play a role in weight loss.  Studies show that the more calcium is stored in a fat cell, the more fat the cell will burn, helping with potential weight loss.

NutriGenesis GTF Chromium: GTF Chromium has been shown in studies to be linked to a significant reduction in bodyweight. It may help you to lose weight by enhancing insulin action helping with fat storage; keeping body sugar within normal range and regulating appetite, and by supporting the metabolism to deal efficiently with fats, proteins and dietary sugars.

OUR CONCLUSION: Performance Lab SPORT Burn is an excellent choice for anyone looking for a safe, stimulant-free fat burner that specialises in fasted training. It’s refreshing to see a fat burner that eschews numerous ingredients and instead concentrates on just six that WORK.

BUY: Only available direct from the Performance Lab website

Ideal For: For when you need to melt the fat and are prepared to put in the work.

Instant Knockout is a proven fat burner than can deliver a winning punch to anyone seriously following an intensive diet and exercise regime. Its mix of green tea, caffeine and green bean should boost your metabolism enough to help burn fat even while you catch some Zzzs. While it does use stimulants, both they – and its appetite suppressants – are natural and in safe enough doses to take daily.

Instant Knockout’s core ingredients include green tea extract (a recognised fat burner that sparks thermogenesis and has been shown to reduce body fat — as well as boosting the thermogenic elements of caffeine anhydrous, included here at 300mg per serving.)

Green coffee extract (coffee beans which haven’t been roasted) are also included in Instant Knockout, effective for their cholorogenic acid, which slows the rate that fat is absorbed from food.

These three ingredients are combined with dietary fibre glucomannan (the biggest ingredient at 1800mg), which swells after eating to help you feel full, effectively suppressing the appetite.

These are combined with cayenne pepper (raises body temperature, suppresses hunger), vitamin B6 and B12, zinc, GTF chromium and black pepper extract. All of which help to boost protein synthesis, elevate metabolism and aid energy, among other benefits.

OUR CONCLUSION: If you are serious about losing fat and retaining muscle, you need to opt for a serious fat burner too – and Instant Knockout is as serious as it gets. Delivers a strong, natural fat burning punch.

Ideal For: Women who want an approachable fat burning solution, exclusively aimed at, and designed for, women.

Many fat burners on the market say they are appropriate for women as well as men, but their literature speaks volumes: lots of pumped-up muscled men, and names that conjure up ultra-macho activities. Hourglass is a refreshing change – a fat burner aimed at women, with subtle packaging and female-friendly marketing.

Its promotion is full of positive body-confident messages, such as choosing its name because an ‘hourglass shape looks great, no matter what size you are’.

Hourglass uses nine ingredients to help you burn fat via slightly different pathways. They include popular dietary fibre, glucomannan (1500mg), which absorbs water to swell in the stomach, promote satiety and slow down the emptying of the stomach. It is an effective appetite suppressant.

Added to that is green tea extract (500mg), one of the most effective fat burning ingredients around, raising levels of the hormone norepinephrine. Guarana, 100mg, provides an energy and metabolism boost, thanks to its natural caffeine. It is a stimulant, so you won’t want to take Hourglass at night.

Other ingredients include Capsimax (100mg), a hot pepper extract to boost thermogenesis; vitamin B6 (as P-5-P) to boost carb burning; vitamins B12 (to balance female hormones) and D3, chromium (helps to prevent cravings by normalizing sugar levels in the blood) and BioPerine to boost the formula’s effectiveness by boosting absorption.

OUR CONCLUSION: Don’t be fooled by the friendly yellow packaging; this fat burner for women is just as effective as any of the traditional macho-styled fat burners on the market. Many of the same ingredients are found in Instant Knockout, for instance.

We like the fact that Hourglass focuses on tackling snacking – a key female-focused diet issue – with its glucomannan, cayenne pepper and chromium mix. Snacking is often the downfall of many weight loss endeavours, and research shows women tend to eat an average of 450 calories a day from snacking alone.

Read our Full Review on Hourglass 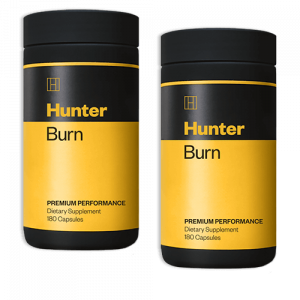 Hunter Burn is one of the three products in the Hunter range from popular UK supplement company, Roar Ambition, coincidentally the makers of Instant Knockout. The other products are Hunter Test (T-booster) and Hunter Focus (nootropic), making it clear that the Hunter range is aimed at men, though there’s nothing in Hunter Burn that wouldn’t suit women too. The Hunter range also seems to be aimed at a slightly older audience as well, possibly the over 40s.

Hunter Burn’s formula is impressive. It combines traditional fat burning ingredients such as glucomannan, the dietary fibre that expands in the gut to promote satiety and reduce appetite, alongside green tea and cayenne pepper. But it combines them with promising new substances such as white kidney bean extract — a carb blocker — and vitamin D3 (not a new ingredient per se, but unusual for a fat burner yet shows promise),

We’re particularly excited by its decision to include Matcha Green Tea as opposed to normal green tea. These are green tea leaves ground into powder and consumed as a drink. As a consequence of not having to throw the leaves away (as you do with normal green tea), Matcha Green Tea is higher in nutrients, caffeine and fat-burning antioxidant, EGCG. We’re also impressed by the 200mg of nootropic Theanine that it chooses to add, ensuring the higher caffeine content in the green tea won’t leave you with the jitters.

All in all, Hunter Burn deserves a mention on our Best Fat Burners in the UK list. This is a mature fat burner for mature people.

We want to make a special mention of the phenomenally popular Grenade Thermo Detonator, mostly because, well, how can we not?! It has been Amazon UK’s No 1 Best Selling Fat Burner for a long time now and shows no sign of losing its crown.

But it needs to come with a warning.

Anyone taking Grenade Thermo Detonator can’t help but notice the massive kick it gives you – that’s thanks to its high caffeine content (500mg green tea, 225mg caffeine, 10mg green coffee per two capsules; a daily serving is double that). Added to that is the controversial ingredient Bitter Orange (420mg per two caps). The active ingredient in Bitter Orange is synephrine, a less potent fat burner than ephedra which was banned for its potential heart-related issues. While it may be less potent, there is still concern than synephrine also stimulates the heart, however.

Indeed, WebMD lists Bitter Orange as ‘POSSIBLY UNSAFE when taken as a supplement for a medical purpose such as weight loss.’ It goes on to add that either when taken by itself or used in conjunction with caffeine, bitter orange could ‘increase the risk for high blood pressure, fainting, heart attack, stroke, and other severe side effects’

OUR CONCLUSION: Grenade Thermo Detonator is so popular that we can’t ignore it, but we personally stop short of endorsing it. Its high caffeine content and Bitter Orange may make the product effective, but we’re not thrilled with the potential safety issues.

Use at your own discretion.