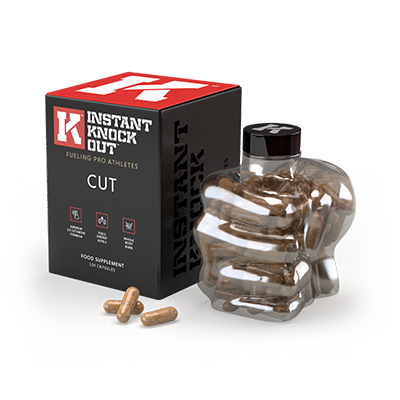 UPDATED TO INCLUDE THE NEW INSTANT KNOCKOUT CUT FORMULA, previously known as Instant Knockout. Full details of formula changes are below…

Instant Knockout Cut is a next-generation fat burner, built on the huge success of Instant Knockout. It’s designed for and has been endorsed by fighters, boxers and bodybuilders for use when ‘cutting’ – the process of dieting and training to melt away fat without losing muscle mass or energy. As such, it’s ideal for athletes, the above groups and anyone intent on following an intense exercise regime who wants to get trim but stay strong.

Instant Knockout Cut uses proven scientifically-tested ingredients to create a powerhouse base fat burning stack. It then combines these with nutrients that help to boost the potency and absorbency of all ingredients, creating a ‘whole body’ fat burner. Add glucomannan to the stack – a fibre that expands in the stomach to promote satiety and control appetite – and you have a triple whammy fat burner. As its name implies, it really does pack a punch.

The new formula also removes some of the stimulant load of the older Instant Knockout (removing green coffee while retaining the caffeine and green tea so it still gives a powerful boost) and provides l-theanine to reduce any side effects from it. A clever addition, and one of the only failings we could see with the old Instant Knockout formula. Definitely a good move.

If you’re curious to see how manufacturer Roar Ambition has improved their headlining fat burner, you can see the formula changes at-a-glance here. The new Instant Knockout Cut formula:

The manufacturer calls it their ‘2.0 Cut Above’ formula, researched for 6 years, and it promises to help you burn fat and cut, with a thermogenic boost, appetite control and a faster metabolism. Let’s take a look at the ingredients in detail… 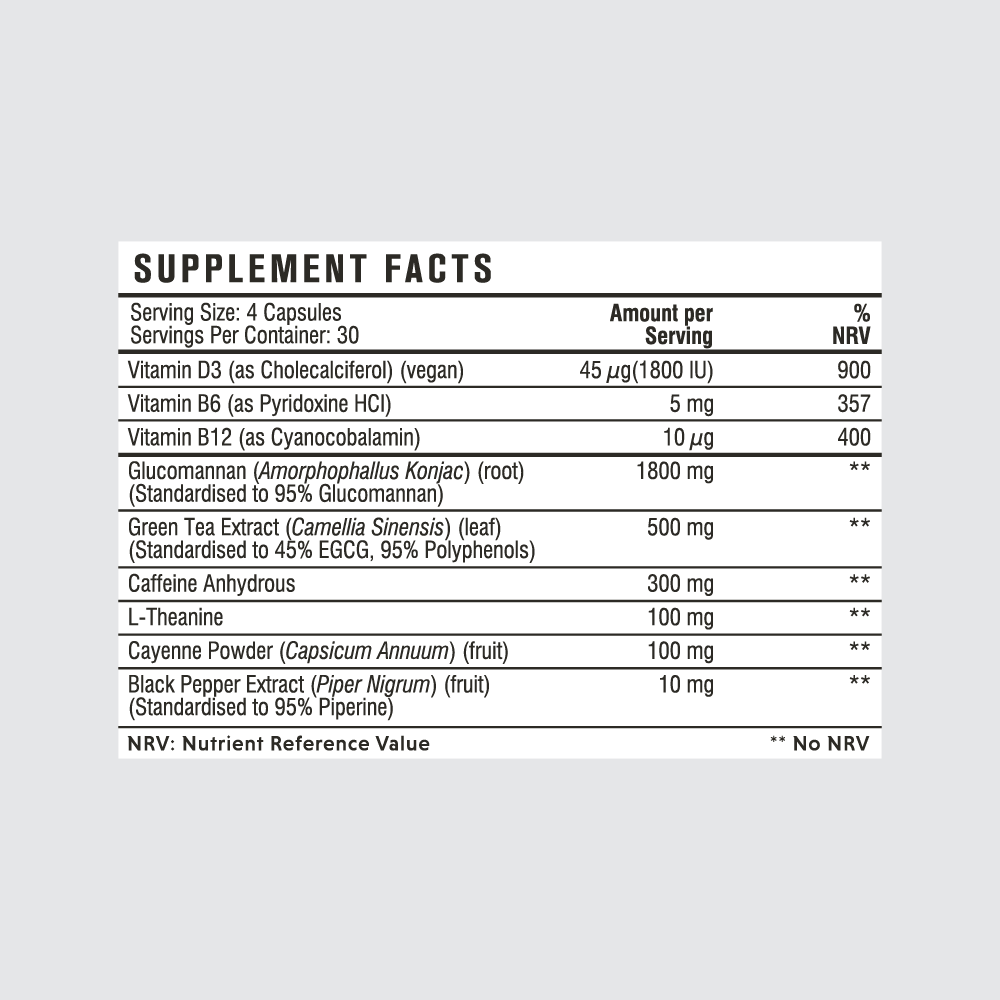 The biggest ingredient in Instant Knockout is glucomannan (1800mg), a natural dietary fibre made from the konjac root. It swells in the stomach to make you feel fuller and prevent the desire for snacking between meals, acting as an appetite suppressant. It’s technically not a fat burner, but is a very clever addition to this stack, helping you to shred weight without feeling hungry all the time. Glucomannan is recognised as one of the most effective appetite suppressants around. 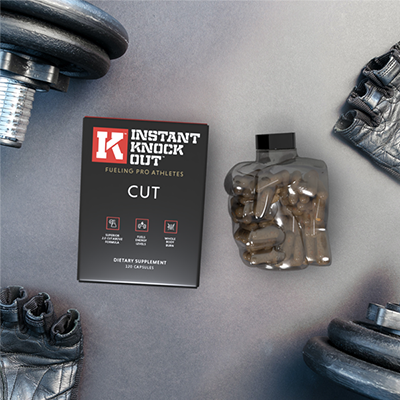 Green tea is the second biggest ingredient (500mg) and is, we think, the best fat burning ingredient around. It stimulates the metabolism, boosts endurance and elevates norepinephrine, the fat-burning hormone.

Green tea works very well in synergy with caffeine (included here is a generous 300mg of caffeine anhydrous). When caffeine and green tea combine, it boosts the number of catecholamines in the body, chemicals that encourage the body to burn fat for energy. The caffeine will also give a big metabolism boost, stimulating and energising you on to an improved physical performance in the ring or the gym.

Of course, caffeine can come with certain side effects, such as potential jitters, anxiety or a late energy slump. That’s where Instant Knockout Cut’s additional L-theanine comes in. A nootropic in its own right with anti-anxiety benefits, it helps to tackle any side effects and should make this a jitter-free formula. We’d like to underline how pleased we are with this addition to the 2.0 Cut Above formula — any product with generous stimulants should contain L-theanine.

Cayenne pepper (100mg) naturally raises your body temperature giving you a thermogenic boost, encouraging the body to burn more calories as it tries to cool down. It is also believed to reduce the amount of fat that the body stores and to help suppress appetite. In one study, it reduced calorie intake by up to 12%.

Other ingredients include vitamins B6 and B12, which help to turn your food into energy to fuel your workouts as well as boost your mood and motivation, and potentially encourage a lower weight gain in the longer term (B12).

Black pepper extract (standardised to 95% piperine) is the final ingredient, which helps to boost the absorption of all other ingredients.

Most of the ingredients in Instant Knockout Cut should be well tolerated. It does have a generous caffeine content which may cause issues for people with caffeine sensitivity, though any negative side effects should be offset by the additional l-theanine. We’d still recommend that you don’t take any other caffeine sources alongside Instant Knockout Cut, however.  You’ll also need to drink at least 8oz of water with your capsules in order for the glucomannan to take effect.

Take one capsule four times a day — the first, immediately after waking and before breakfast and the second between breakfast and lunch. Take the third capsule one hour after lunch, and the fourth, one hour before dinner. As mentioned above, make sure that you take your last tablet at least 5 hours before you go to bed.

Oh boy, does Instant Knockout Cut work! That’s affirmative. And so it should. It has the ingredient you need to spark thermogenesis, trigger fat burning, control appetite and blood sugar, break down fat, block carbs AND boosts energy and enhance performance. Can you see now why it’s one of our top-ranked fat burners on the UK market?

In order to shred weight but keep your strength and muscle mass, you don’t need a ritzy fancy fat burning supplement; you just need a science-backed, clever, no-frills product like Instant Knockout Cut. It may be designed and customised for fighters, but it will work for everyone – including women, despite the masculine-looking branding –as long as you’re prepared to train to the max.

It’s a masterful fat burner with very well-chosen ingredients and, despite its simplicity, it packs a powerful punch.