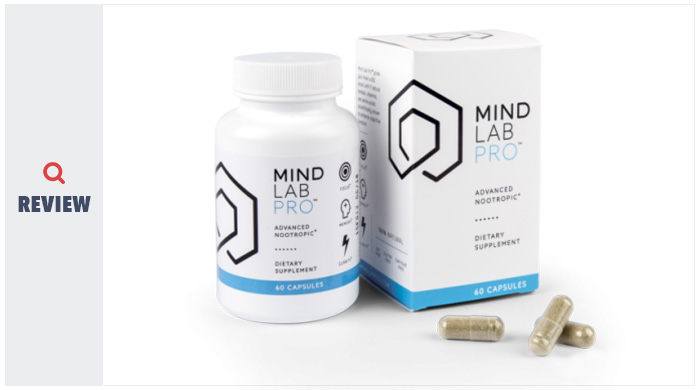 Mind Lab Pro has been around since 2015, the year Smart Drugs really came into their own. But this isn’t the fiction-led crash-and-burn pill of the film Limitless — as our Mind Lab Pro review will show you, this is the real thing.

Mind Lab Pro v 4.0 is a genuine ALL-NATURAL and SAFE nootropic pill that helps your brain to work better, faster and clearer.

You don’t even have to take our word for it — independent scientists at the University of Leeds have come to the same conclusion.

Read on to see why we — and independent scientists — are such big fans of Mind Lab Pro 4.0.

The manufacturers of Mind Lab Pro, Opti-Nutra, set out to create a safe, effective, and stim-free nootropic pill that could help to boost clarity, focus, mood, memory, long-term brain health, and more, without the crash that many other nootropic pills cause.

During the past 6 years, there have been 4 different formulations of Mind Lab Pro  — culminating in one heck of an achievement: the title of the world’s first independent scientifically proven nootropic.

Mind Lab Pro v 4.0 includes 11 top-notch ingredients. All are in premium forms, proven to work, and included in clinically effective dosages — no cramming in buzz names without caring whether they can do the job.

According to the manufacturers, Mind Lab Pro is intended to enhance mental function by increasing brain energy and regeneration, banish brain fog and act as a universal nootropic, adapting to your daily nootropic needs.

EDITOR’S NOTE: Before we go into detail on the ingredients, let me say one thing: Mind Lab Pro is my personal favoured nootropic, and the only one now in my cupboard. I take 2 capsules every day and another two for those days when I need a little extra mental push — for when I’m tired, feeling restless and unable to focus, or need to concentrate and feel extra creative.  I really do notice a difference in my productivity, creativity, and focus when I’m using Mind Lab Pro on a regular basis. For this reason — and because of Opti-Nutra’s stellar reputation — I’m more than happy to recommend Mind Lab Pro v 4.0 to readers. It’s also why we’ve chosen it for our Best Nootropics of 2023 in the UK.

As we mentioned above in this Mind Lab Pro review, this nootropic has been backed by independent scientists at the University of Leeds. Dr Andrea Utley and her team examined the effectiveness of Mind Lab Pro and concluded…

It’s worth noting that the study showed improved performance after just two months of taking Mind Lab Pro and a decline after one month of stopping the nootropic. So give it a little time, and keep going!

In her study, Dr Utley said: “The results of the current study suggest that there are benefits to cognitive performance when taking Mind Lab Pro. In this study there has been a significant positive impact on information processing… this would indicate improvements in focus, attention, and decision-making. It is interesting to note that this has been especially beneficial for those over the age of 30 but still significant for those under the age of 30.”

See the results of the study here

Next in this Mind Lab Pro review, let’s examine the ingredients included in this formula. All of the ingredients in the Mind Lab Pro nootropic stack are natural and, according to numerous studies, work as effective nootropics. They come from plants, mushrooms, berries, and other naturally-occurring sources, and work together to provide a full-spectrum brain boost.

Bacopa monnieri is an antioxidant long used in Ayurvedic medicine. Mind Lab Pro contains 150mg standardised to minimum 24% bacosides with nine bioactives. What does that mean? The manufacturers guarantee that every serving of Mind Lab Pro will contain exact levels of the herb’s nine nootropic compounds. Note that this is a slight formula change made in 2017; the manufacturer says this version is  more powerful than the previous Bacopa used pre-2017 in Mind Lab Pro. Other versions of the herb sold elsewhere may not contain all compounds, or the testing system used may not reflect Bacopa’s true potency. Bacopa is particularly good for memory retention, restoration and recall.

To Reduce Stress and Hone Focus:

N-Acetyl-L-Tyrosine (175mg), a non-essential amino acid, affects neurotransmitters in the brain to boost attention span, particularly when over-stressed, overworked or sleep-deprived. The amino acid L-Theanine (here as Suntheanine®, 100mg), found in green tea, affects norepinephrine and dopamine levels to bring about a ‘relaxed awakening’ and reduce stress. Also included is Rhodiola Rosea (50mg), a plant that acts as a mild stimulant to strengthen performance when under stress.

To date, there have been no reported side effects of Mind Lab Pro, and there is nothing in its ingredients to suggest there should be any. Its new ingredients are also reasonably well tolerated.

Mind Lab Pro isn’t targeted at any particular demographic and doesn’t offer any health warnings, as such. All ingredients are natural and seem to be well tolerated. However, as with all supplements, we would advise pregnant or nursing women, anyone under 18 and people with existing medical conditions to seek medical advice before taking this product.

The manufacturers Opti-Nutra recommend taking two capsules a day, though you can take up to four in a 24 hour period. You may notice some improvement in a few days, but it usually takes a month or so to feel the full benefits.

Yes, yes and yes. Mind Lab Pro is great for motivation and focus. On a personal note, everything seems that much sharper when I take Mind Lab Pro. I have a lot more mental energy and my ability to concentrate is now almost legendary. I feel much more on top of everything when taking Mind Lab Pro, even down to improving my verbal memory and being a much more effective communicator.

Mind Lab Pro works, and that’s no doubt because it is a great quality supplement with better ingredients (and dosages) than anything else I’ve found on the market.

Mind Lab Pro is upfront about its dosages and ingredients, and we like that. There is no need to hide behind ‘proprietary blends’ when you choose some of the best ingredients in the right dose in the first place. Some of those nootropics will tackle immediate cognitive issues, while others are great for the longer term.

Mind Lab Pro is so effective because it concentrates on strong powerhouse nootropics that work very well in smaller amounts, allowing it to provide at least ten of its eleven ingredients in clinically effective doses. The manufacturers have done their research. It’s just one signpost to quality, of which there are many with Mind Lab Pro.

This sounds like common sense but it is a relatively revolutionary approach in a market that seems to spend more time trying to create a buzz than it does in making sure products work as well as they possibly can. That could be the cynic in us talking, of course.

It’s also great peace of mind to note that independent scientists in Leeds University in the UK have studied Mind Lab Pro v 4.0 and recommend it. Not only that, but they’re genuinely shocked at how statistically significant its impact is.

We hope you’ve enjoyed our Mind Lab Pro review. As you’ll see, we do not hesitate to recommend Mind Lab Pro and to call it our favourite nootropic stack to date.