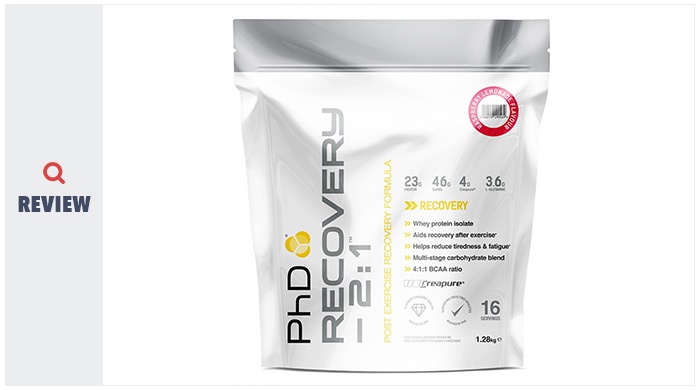 It seems that practically every bodybuilder or athlete is adding more protein to their diet nowadays, often in the form of pre or post-workout shakes. PhD Nutrition Recovery 2:1 fits into this market perfectly.

It’s not always easy to source enough protein from food, particularly if you have a busy lifestyle, which is where a workout shake comes in.

Why do you need protein after a workout? Simply put, protein is used in muscle production, as well as numerous other bodily functions, such as the creation of hormones, enzymes, the immune-system, and more. Protein is involved in pretty much every single cell and organ in the body, but it is its ability to help muscles heal that we’re particularly interested in here. Intense training causes micro tears to the muscles, tiny tears caused by contraction of muscles. Protein, once delivered to the muscles, starts to aid repair and recovery.

If the muscles don’t heal adequately and fast, it puts future training in jeopardy or puts you at risk for an injury caused by overtraining.

Solid food can take some time to break down protein, but a protein shake allows protein to reach the muscles as quickly as 30 minutes later. As your body naturally starts to heal muscle right after a workout, a quick shake is a good idea, followed ideally by a high protein meal an hour later.

Protein isn’t the only good idea after a workout – you need some carbs too.

You’ve no doubt heard the mantra urging you to choose Low Glycaemic carbohydrates over simple carbs to avoid insulin spikes and provide energy steadily throughout the day (to avoid the crash and burn method). Well, forget about that when it comes to post-workout. Post workout is one time where you should definitely opt for some simple carbohydrates to kick-start the whole recovery process.

During intense training, the muscles use both glucose and glycogen for energy, often until blood glucose levels get so low that there just isn’t any more energy to use. At that point, the body secretes cortisol, the ‘stress hormone’ which seeks to convert muscle tissue to glucose. This causes a loss of muscle tissue, something you want to rectify as soon as possible.

The quickest way to do this is to have a post-workout shake containing generous amounts of simple and High Glycaemic carbs which allows an insulin spike and supplies the muscles with nutrients.

The best ratio of Protein to Carbs is at least 2:1, with twice as many carbs as protein, though some studies and experts suggest ratios as high as 4:1.

PhD Recovery 2:1 provides 24g protein to 48g carbs. This is likely to be the ideal amount for anyone wanting to cut – i.e., to lose fat and build lean muscle at the same time, rather than anyone seeking a mass muscle gain.

Whey protein is a popular protein form as it can be absorbed by the body much quicker than other protein alternatives such as milk protein or casein. Once it is absorbed, it promotes protein synthesis which in turn aids recovery and promotes muscle growth.

Whey Protein Concentrate, in the middle of the list, is the cheaper more affordable form of whey, though it can still do a good job.

All in all, while it would be ideal for the protein in PhD’s Recovery 2:1 to be solely made from Hydrolysed Whey Protein Isolate, the combination of different whey protein forms still makes for a decent and effective protein source.

Note, however, that its leucine count is very low at just 0.48g (Men’s Health recommends a protein product with at least 3g of leucine), though PhD places its emphasis instead on Creapure® Creatine Monohydrate (4g per serving).

Creatine Monohydrate is another popular pre and post-workout option, thought to boost strength, performance and aid muscle gains. There is some debate over whether taking it before or after a workout is best, but most people opt for the later. Four grams per serving may be a little on the low side, however (5g is considered optimal for maintenance) but studies do show that it works more effectively (up to 36% more so) when combined with simple carbohydrates.

The other important aspect to the 2:1 ratio, PhD Recovery 2:1 contains 48g of carbs. These are in the form of:

As we know, carbohydrates are an important part of a post-workout drink and the forms included in PhD Recovery 2:1 are pretty optimal.

Maltodextrin, while actually a complex carb made from potato starch, corn or rice, acts very similar to a simple carb thanks to its shorter molecular chain. Absorbed directly through the gut, it raises insulin and blood sugar levels without the dramatic drop that simple carbs can cause, offering a more sustained recovery.

Dextrose is also known as glucose and is a monosaccharide, meaning it is comprised of a single sugar molecule. It’s a more common sugar often used in post-workout shakes and boosts insulin and blood sugar effectively. Some people do find that the use of dextrose can result in fat gain, however, so you would need to test this product and assess its results. The good news is that Maltodextrin shows no apparent weight gain issues.

Waxy Maize Starch is the relatively new carbohydrate product on the block. It comes from corn starch and passes through the gastric lining to be absorbed super quickly, without any need for gastric emptying. It should also allow the Creapure® Creatine Monohydrate to be absorbed more speedily. The jury is out on whether it does actually create a rapid insulin spike, however, but it is potentially a useful carbohydrate to use in a stack. See some of the myths and realities of Waxy Maize Starch

Waxy Barley Flour is another carb but relatively little is known about this, compared to the more standard maltodextrin and dextrose. Quite what benefit it has over Waxy Maize Starch is unclear.

Added to the PhD Recovery 2:1 mix is 200mg of Vitamin C per 80g serving (two scoops), which is believed to help reduce tiredness and fatigue, and maintain the immune system during intense exercise.

The following review is from Holland ands Barrett

The following reviews are from Amazon UK for Berry Blast

PhD Nutrition states that Recovery 2:1 is suitable for endurance athletes who need more carbs, athletes looking to recover after intense exercise or athletes who require a high protein shake to boost muscles.

There are usually few side effects with post-workout supplements, but some people may suffer from lactose intolerance. This is less likely with Whey Protein Isolate. Flatulence and stomach issues may also be a risk, as can nausea if you drink your shake too fast after a workout (leave it ten minutes).

Note too that the Department of Health recommends people avoid consuming more than twice the daily recommended amount of protein (55.5g for men and 45g for women) due to longer term concerns with osteoporosis and kidney issues.

Add two scoops of PhD Recovery 2:1 (80g) to 400ml of ice cold water and shake (in a PhD shaker cup) for ten seconds. Drink one shake daily, ideally within 10 minutes of completing intense exercise, according to the manufacturer.

PhD Nutrition Recovery 2:1 contains quality ingredients in mostly sufficient doses that should ensure you are provided with enough carbs and protein to recover after intense workouts. Its use of whey protein demonstrates its commitment to quality, while its fast and slow-release carbohydrates should help with both immediate and sustained recovery. Magnesium and vitamin C are also added to support muscle function and tackle free radicals that can cause damage to muscles and cells.

The majority of reviews of this product are positive.

It’s just a shame that its Leucine count isn’t higher as this is one of the branch-chain amino acids that really helps with muscle recovery.