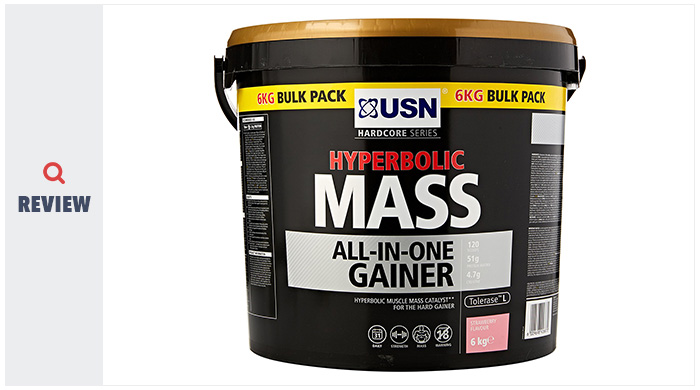 **** UPDATE: Please note — while you can still buy this product on Amazon UK (only 1 left in stock at the time of writing), this particular variation of the product seems to have been officially discontinued by USN. You may want to try USN’s Muscle Fuel Anabolic instead. ****

USN Hyperbolic Mass is a food supplement that falls under the category of weight gainer, or as it also known, mass gainer.

The idea of a mass gainer is to help people who cannot put on weight bulk up and add muscle; think of it as a ‘muscle catalyst’ if you will. Individuals with a fast metabolism will benefit from consuming more calories and quality carbohydrates in order to avoid having to break down muscle tissue for energy.  That’s where a weight gainer comes in.

USN Hyperbolic Mass includes as much as 231g of carbs per 300g serving, and 51g protein. It is also high in Branched Chain Amino Acids (BCAAs), amino acids which directly influence muscle gain.

First, a word of warning: USN Hyperbolic Mass is sold on Amazon UK as well as the official USN website (and other sources) but the nutritional information about it is confusing and, in some cases, may be inaccurate.

On USN’s official Amazon page for Hyperbolic Mass, for instance, we are told that it contains 61g of high quality protein, yet lower down the page it talks about 51g of protein and lower still, 53g of protein. Confusing, much?

And, finally, do we believe it has 4.7g of creatine as listed on Amazon, or 4.5g as listed on the official USN website?

Regardless of the reason, someone needs to sort it out. Even the nutritional information label for the Amazon UK product differs in some cases to the Amazon text. It’s a bit of a mess.

Anyway, we’ve chosen to go with the official USN website’s account of the All-In-One Hyperbolic Mass and its nutritional information, which is:

USN Hyperbolic Mass includes a 29.5g hyperbolic stack including Creatine Monohydrate, HMB, Taurine (1g per 300g serving), Avena Sativa, Glutamine (6.5g), Beta-alanine, and L-glycine. It also has a wide amino acid profile including 3.1g Leucine, 1.7g Isoleucine, 1.7g valine. All in all, it has 6.5g of BCAAs (Branch-Chain Amino Acids). Let’s take a closer look at some of these:

Creatine is considered a headline ingredient when it comes to weight gainers. Creatine monohydrate is a combination of three amino acids – glycine, arginine and methionine – and is often mistaken for a steroid, though it is completely natural.

Its usefulness here is in its ability to aid strength and endurance, providing extra ATP to fuel the muscles. Studies have shown that it can aid in muscle thickness in young adults.

Creatine can also help to reduce muscle damage after a workout by reducing inflammation.

4.5g of creatine may be a little lower than normally recommended (5g is suggested for maintenance), but when combined with a decent amount of BCAAs in a weight gainer, the results can be noticeable.

Leucine is one of the three aforementioned BCAAs – isoleucine and valine are the others – and between them they make up a third of the body’s muscle protein, * yet cannot be made by the body alone. BCAAs help the body to absorb protein, reduce muscle fatigue and encourage muscle recovery after exercise, but are also depleted during exercise.

Taking them pre-workout should help to boost performance, while supplementing with BCAAs after a workout helps to lower stress-related cortisol which destroys muscle. USN Hyperbolic Mass contains 6.5g of BCAAs in total.

» See the #1 BCAA Supplement This Year «

USN Hyperbolic Mass contains a generous 6.5g of glutamine, a ‘buzz’ ingredient for muscle gain. Fans will tell you that glutamine helps to build lean muscle and aids with post-exercise recovery, BUT Examine.com isn’t so sure. It states that the only proven research on muscle gain as a result of glutamine supplementation has been seen on people suffering from muscle wasting disease or trauma. It has yet to be proven effective for healthy people.

USN Hyperbolic Mass also contains HMB — β-Hydroxy β-Methylbutyrate – which is a metabolite of leucine and is more potent on a gram by gram basis at aiding muscle retention (reducing the rate of muscle breakdown) than leucine is. The latter, however, is more effective at encouraging protein synthesis and thereby increasing muscle mass.

Human studies of HMB have so far focused more on its ability to promote muscle growth and results suggest that, like glutamine, it may be more effective for people with muscle atrophy than healthy people.

Beta-alanine is thought to boost muscle endurance and subsequent performance by encouraging the production of carnosine. Carnosine helps to control the amount of acid build-up in the muscles which causes fatigue.

Some experts warn that it may take weeks to build your carnosine to effective levels, while studies suggest beta-alanine may be more effective at reducing your rate of perceived exertion (how hard you feel your body is working) than in actually boosting performance.

As such, it may be more effective for gym work or training (meaning you won’t feel as tired as quickly) than in competitive sport.

Note: Beta-alanine has a potential side effect – paresthesia, tingling of the hands, face, fingers, toes or chest. See our section on side effects later.

USN Hyperbolic Mass also contains numerous vitamins and minerals, such as potassium, vitamins A, B1, B2, B6, B12, folic acid, iron, magnesium, phosphorous, and more.

Weight gainers are aimed at people who need to put on body mass but who don’t find it easy, and who want to build lean muscle without putting on fat. You may have a fast metabolism which doesn’t allow you to bulk up easily.

USN recommend you start by adding three scoops (150g) of powder to 375-450ml of water or full cream milk (the latter will increase the calorie count). After a week, you can move on to six scoops (300g) of powder, mixed with 750-900 ml of water or milk divided between two USN shakers.

USN Hyperbolic Mass can be taken at any time during the day. Ideally, you wouldn’t take a mass gainer with food as you will want to get as many calories as you can directly from food first.  Taking it between meals will also ensure you consume a steady flow of calories throughout the day.

USN Hyperbolic Mass is a food supplement so some of the potential side effects that you could experience will be similar to eating a lot of excess ‘stodgy’ food, such as oatmeal and milk. The main side effect people report is digestive issues, such as stomach cramps, diarrhoea, bloating, all signs of consuming a huge ‘calorie bomb’ in one go. You may be unlucky and find that your stomach simply can’t handle the amount of calories in a mass gainer, or you could try splitting your 300mg serving up into smaller servings that you drink throughout the day.  Mixing it with water rather than milk will help to reduce the calories.

Beta-alanine can also cause paresthesia, a tingling of the hands, feet, chest and face, which may occur in dosages of 1g or above. (USN Hyperbolic Mass contains 1.5g of alanine). This is usually a temporary problem and subsides after an hour or two. It should be said that we have not seen any such side-effects reported as a result of USN Hyperbolic Mass, however.

No matter which weight gainer you buy, remember that you won’t turn into the hulk overnight. It takes time to build muscle.

In theory, 3,500 calories roughly equals 1lb of body weight, so assuming you can digest the additional 1,000 calories a day, you may gain as much as 2lbs per week.  Of course, your muscle gain also depends on your diet and exercise regime.