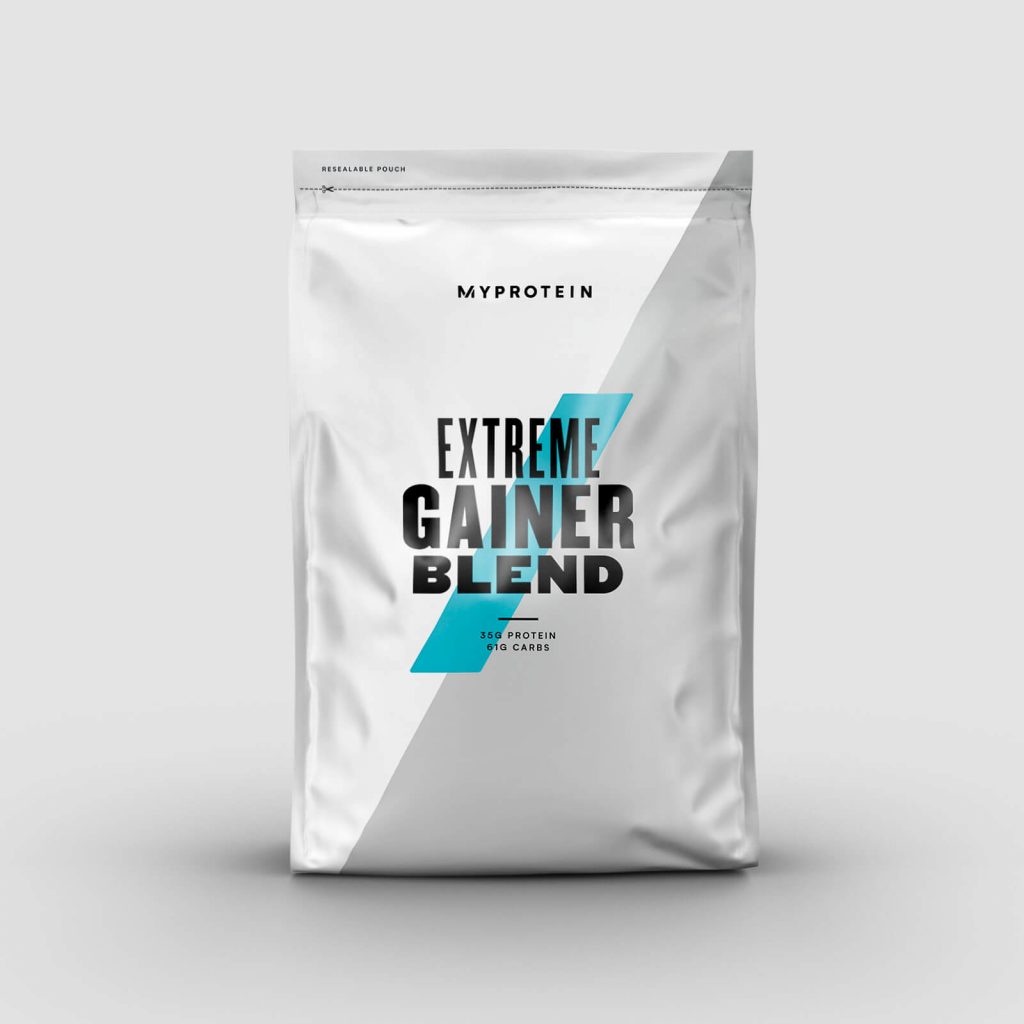 Previously sold as Hard Gainer Extreme, Myprotein have renamed their mass gainer as a part of their rebranding, but they note that they’ve “not changed the taste or the nutritionals”.

Know your way around mass gainers? They’re protein shakes engineered to boost your calorie intake and get you building the muscle you’ve earned in the gym.

Myprotein hold a chunky share of the mass market in protein shakes and supplements, and when it comes to mass gainers it’s the same story. A popular product at a middle-of-the-road-price, but when it comes to optimising muscle building, does it deliver the goods?

Let’s take a dive into the ingredients and find out. 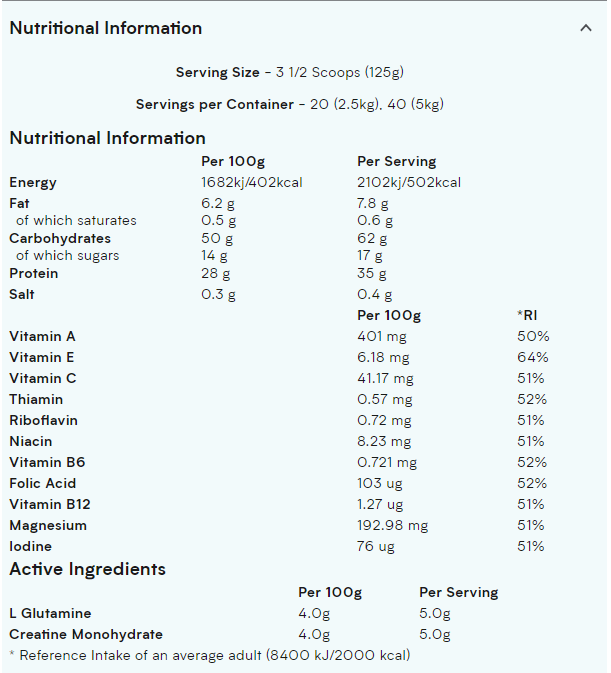 This is the core protein used in most mass gainers and protein shakes that you’d pick up. Cheap to produce and typically coming in between 35% and 80% protein content by weight (more commonly close to the latter), it’s fast absorbing, packed full of BCAAs and is shown to promote muscle protein synthesis.

The whey concentrate (not the protein weight) makes up 12.4% of the total weight, which isn’t much, but there are other sources of protein, and mass gainers are typically lower on the protein content due to the added carbs and fats.

The more refined brother of whey concentrate, isolate is purer and so has more protein by weight than whey concentrate. Of course, this means it’s also more expensive. It’s a good addition to the list of ingredients, pushing up the protein content and quality.

Whey isolate is fast absorbing and comes in at above 90% protein by weight, although here, that isolate only makes up 7% of the shake.

A cheaper way of manufacturers getting the casein into their products, milk protein is a blend of casein and whey (most commonly 80:20) that hasn’t been processed apart, cutting costs and bringing extraneous sugars and fats. Which, in the case of a mass gainer, isn’t a bad thing.

Casein is the gold dust in the mix here. The Extreme Gainer Blend has plenty of quick absorbing protein, and the casein is longer chain and so slower to be made available for muscle repair. Casein also forms a fibre-like gel in the gut which slows its digestion further. This extends the supply of protein long after the whey has been absorbed, shuttled around the body and used up.

The milk protein is only 6% of the weight of the shake, which means roughly 6g of casein in the 35g of protein per serving. Which isn’t much when you consider that a glass of milk can contain 7g of casein.

Chemically separated from milk by altering the pH, the casein is denatured during the process — destroying its structure — which slows its absorption. This doesn’t effect its usability in the body. It’s highly popular with manufacturers because it’s over 90% protein by weight and mixes freely and easily with water.

It is, in a way that sounds odd, a little too refined. Where casein is rich in BCAAs and glutamine, calcium caseinate is not. Extreme Gainer Blend is 5.5% calcium caseinate. Sure, it’s in the right direction, but micellar casein would be better on all fronts.

The largest single ingredient of this mass gainer (40.2%). Modified maize starch is partially degraded and refined starch from maize, or corn, and is most commonly used as a thickening agent and texture enhancer.

They are refined carbohydrates, and there hasn’t been a huge amount of research into their impact on health as they’re usually found in small amounts. The glycaemic index of modified maize starch is found to be around 77 in solution, which means it shouldn’t have a huge impact on blood sugar, and the overall sugar content of 17g of sugar per serving isn’t too bad. 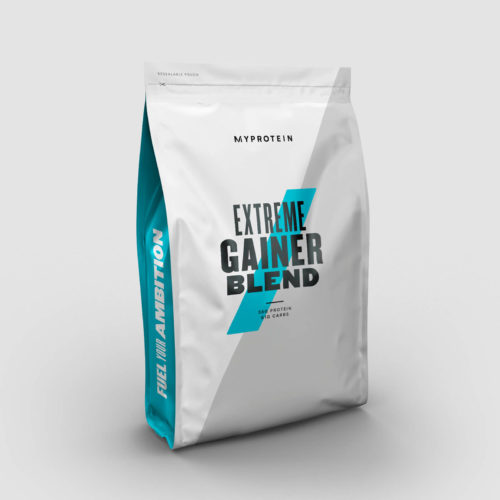 High in beta glucans which are found to reduce LDL (bad) cholesterol and reduce risk of heart disease and stroke, oats are also low GI even in their powdered form. A great source of healthy carbs that will boost your calories, they’re also gluten free. Unfortunately Myprotein only provides us with 4.7% oat flour by weight which seems a little pointless.

A manufactured saturated fat made from dairy fat, coconut oil and palm kernel oil. They are used by athletes and sports professionals as energy sources, and have been linked with slightly reduced fat mass when consumed in place of other fat.

It’s an expected addition to add a dietary fat to the blend, but doesn’t really change the game.

Found in large amounts in whey and casein protein, as well as in meat and dairy products, there’s debate whether supplementing glutamine on top of a diet high in protein is effective. It hasn’t been found to boost muscle mass but has shown promise in helping individuals recover after traumatic injuries.

Extreme Gainer Blend comes with 5g of glutamine listed which, regardless of debate, is a decent amount.

Creatine is a great supplement for a mass gainer. One of the most researched supplements on the market. As well as boosting performance by providing rapidly available energy during exercise, it also increases fluid flow to muscles.

Proven to boost power output, overall weight and lean mass, creatine is such a valuable supplement, it’s really good news to see it listed a here at 5g, which is an optimal dose so you won’t have to supplement with more creatine.

High in omega-3 fatty acids, antioxidants and fibre, flax seeds are a thoughtful addition. Shown to reduce cholesterol and high blood pressure, the addition of omega-3 is great to see as most people don’t get enough of the stuff. 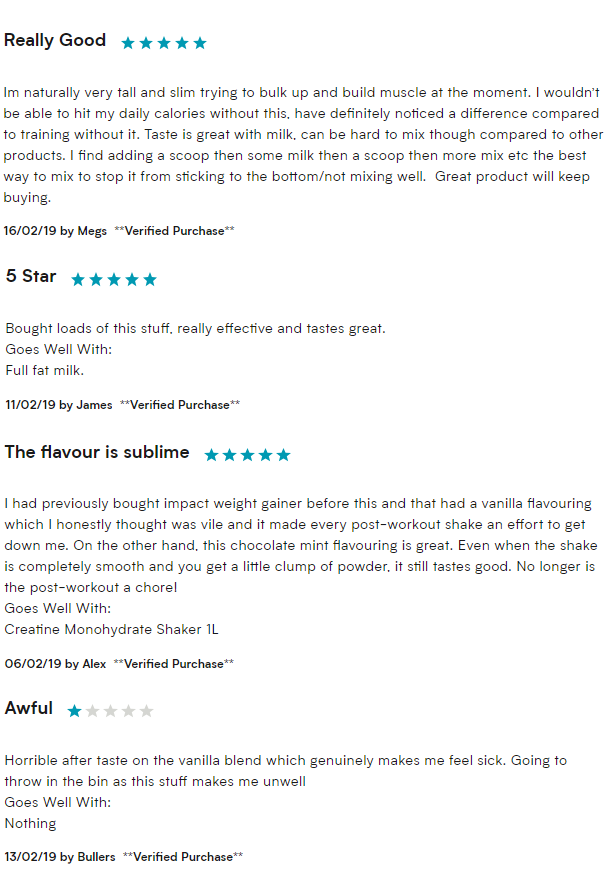 Other than the allergens, the only side effects might be indigestion or bloating.

Myprotein Extreme Gainer Blend is for anyone looking to build muscle and are looking for a boost to their calories. This mass gainer is designed to get them consuming that 20% extra needed to put on mass.

This is a mass gainer that does what it says on the tin, or… bag. With stellar reviews on taste and mixability, the ingredients tell a story of bulking carbs and a fast acting protein blend that includes a high quality isolate.

Overall the only glaring negative is that the protein content is on the low side and skewed to fast absorbing protein, namely the whey concentrate and isolate. This is to the point where if this is your sole protein supplement, I would also consider taking micellar casein in the evening to provide you with longer lasting protein.

The low-ish 35g of protein might be due to the added 5g of glutamine, but it’s not made clear if this is included in the overall nutrition table or not.

For the price, it’s a decent product that fulfills its purpose. Along with a list of added vitamins and minerals it provides the extra carbs and protein that’ll boost your diet into the calorific surplus needed to build serious muscle.