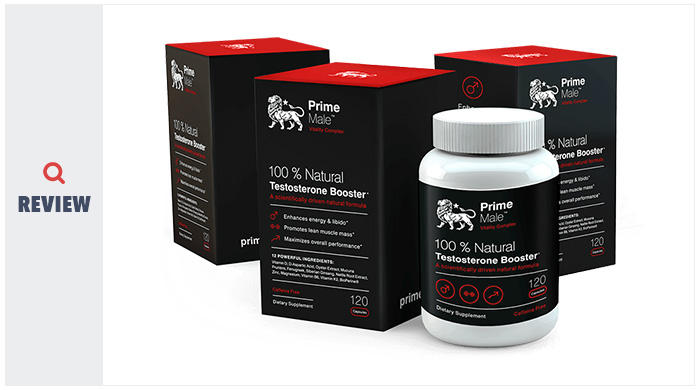 Let’s just put this out there right now: we are big fans of Prime Male. Here at Supplement Reviews UK, we consider it one of the best testosterone boosters that you can buy today.

Prime Male is aimed at a relevant market (men over 30, not-so-coincidentally the age that testosterone levels start to fall) and combines 12 different ingredients. All of those ingredients are either powerhouse T-boosters in their own right, or combine with others to boost their testosterone-related powers.

It’s that synergy that gives Prime Male its power. According to Prime Male, its key benefits include having more energy and strength, losing weight, enjoying a greater libido, better mood, stronger bones, lower blood pressure and better cardiovascular health. The manufacturers also claim it can help to control blood sugar, make skin healthier, promote prostate health and boost cognitive function. The main promise, however, is that taking Prime Male can boost your testosterone levels to what they were five, ten or even twenty years ago.

Wow. A heck of a promise, so does it live up to it? Let’s look at the ingredients and see…

The ingredients which do that include:

D-Aspartic Acid Calcium Chelate (D-AA-CC): This is the premium form of D-Aspartic Acid (D-AA), which has proven very potent. In one study, D-AA increased testosterone by 42% in 12 days. D-AA-CC is even stronger, so imagine the benefits. The theory is that DAA improves communication between the brain and the testes, with the luteinizing hormone promoting the production of testosterone.

Note that there is some conflicting research on D-AA, which suggests that it is mostly beneficial for anyone with a testosterone deficiency (natural loss due to age included), or infertile men. Further research has shown that seminal motility was boosted by between 50-100% in infertile men when taking D-AA.

Prime Male also includes magnesium, nettle root and boron, all of which help to neutralise Sex Hormone Binding Globulin (SHBG).  Experts estimate that approximately 60% of total testosterone is ‘bound’ to SHGB, which renders it unavailable for the body to use directly. Magnesium – included here in premium form as magnesium citrate – reduces the amount of SHGB in the blood, as does boron, while nettle root binds with the SHGB, making more free testosterone available.

Prolactin and oestrogen are female hormones which are also present in the male body. Too much of either, however, can damage testosterone levels; as well as reducing SHBG, boron can help to reduce oestrogen while boosting testosterone. In fact, taking 10mg of boron for one week reduced oestrogen levels by 39%, according to one study.

Prime Male also includes luteolin, which does the same job. Zinc, another ingredient, can reduce prolactin and, as it is concentrated in the testes, also acts as raw material for testosterone creation by booting luteinizing hormone. Adding additional zinc for six weeks increased testosterone in one study, though experts theorise it may only help if you are deficient in zinc in the first place. Note that a lot of sexually active men are deficient as you can lose as much as 5mg of zinc per ejaculation. The body cannot store zinc, so continually needs to be replaced.

Mucuna Pruriens (velvet bean): The active ingredient here, L-DOPA or levodopa, increases testosterone by boosting the luteinizing hormone, as well as the follicle-stimulating hormone. It has been shown to increase testosterone by 39% among men with a low sperm count.

BioPerine® is a patented form of black pepper extract and is 95% piperine, the active substance that promotes the absorption of other ingredients within a formula. It’s a great addition to any testosterone boosting stack.

Korean Red Ginseng 4:1 extract (root): In our Testosterone Ingredients That Work list, ginseng is listed as a ‘maybe’. It’s probably more accurate to think of this as a great addition for bedroom shenanigans, as opposed to a tried-and-tested testosterone booster.

Prime Male also includes the vitamins B6, in premium form P-5-P, widely recognised as an effective testosterone booster though no-one really knows why, and vitamin D3 (shown to boost bioactive, free and total testosterone). It also adds vitamin K2 most commonly recognised as a means of tackling age-related testosterone decline.

The following reviews were taken from Prime Male’s website

Prime Male is designed for use by men over 30, the age at which testosterone is said to decline. This is apparent in its additional benefits, concentrating on prostate health, for instance, and working to boost urinary comfort and sex drive.

We haven’t heard of any reported side effects with Prime Male. A benefit of using good quality and premium ingredients, alongside safe and concentrated herbs, we’d guess. Prime Male should be well tolerated. It doesn’t have any of those pesky potentially dangerous ingredients like bitter orange.

If you are taking any medication or have a medical condition, consult your doctor before taking.

Take one capsule four times a day, ideally with a meal or snack. Prime Male recommends taking a capsule at 8am, 11am, 2pm and 5pm.

We are very happy to state that Prime Male should do everything it claims to… and probably a few more things besides. Remember that long list of promises from the manufacturers of Prime Male at the beginning of this review? Well, you can check each one of them with a tick. They are all very feasible with this combination of ingredients.

Pick up a supplement with 12 ingredients, whether a testosterone booster, fat burner or nootropic, and you can usually guess that a few are superfluous, or included in such weak dosages as to be pointless. That’s not true here. Prime Male includes 12 ingredients and each one has a role to play. It combines them together with genuine synergy, choosing highly absorbable ingredients that complement and enhance each other.

Prime Male is one of the best testosterone boosters ever made, and it’s certainly the one you want if you’re 30 or over.

Where to Buy It

Prime Male is only available from the manufacturer at www.primemale.com