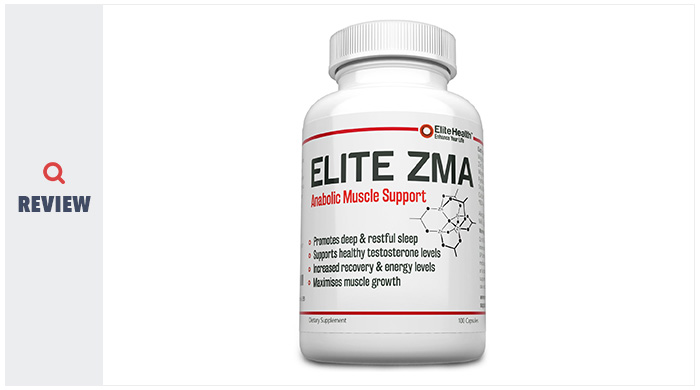 After the age of 30 (some say 25), most men begin to experience a gradual decline in the amount of testosterone in their body. It’s a natural process but it doesn’t follow that it’s a pleasant one. Testosterone is the main hormone associated with muscle mass, bone strength and sex drive, so it can be quite a potent loss for some.

Testosterone supplements such as all-natural Elite ZMA (zinc magnesium aspartate) can help to replace the lost testosterone, and is particularly popular among bodybuilders, athletes and anyone wanting to gain and maintain strength and muscle mass. It is a sleep-inducing supplement that helps the body repair quicker after intense exercise by encouraging deep and restful sleep.

Elite ZMA uses one of the most popular set of ingredients for testosterone boosters, a combination of zinc, magnesium and vitamin B-6.

The micro mineral Zinc is involved in more than 200 enzymatic reactions and the production of various different hormones, including growth hormone, insulin, oestrogen and testosterone.

Magnesium is potentially even more important in the body than zinc, involved in more than 300 enzymatic reactions. These include glycolysis, nucleic acid synthesis, amino acid activation and protein synthesis, among many others. A magnesium deficiency, therefore, can impair muscle growth and testosterone in many different ways.

It is the magnesium in ZMA, an anabolic formula, which encourages muscle relaxation and sleepiness. The muscles recover quicker by being forced to relax during sleep.

Vitamin B6, as pyridoxine

Vitamin B-6 has significant implications on protein synthesis, and is particularly important in allowing the body to unlock carbohydrate energy. It can also reduce the impact of certain catabolic steroids, such as cortisol. A stronger testosterone to cortisol level helps in muscle building.

ZMA is one of the few natural testosterone boosters that has been proven to work. In a Western Washington University study by Dr. Lorrie Brilla (and, it must be pointed out, a ZMA supplement manufacturer), 12 NCAA division II footballers took ZMA nightly for eight weeks, with a separate group assigned a placebo.

The study mentioned above showed impressive results with ZMA, and has been used as the ‘bible’ for ZMA supplementation. However a later 2004 study saw no such results.

The study tested 42 resistance trained men and found no noticeable effect on zinc or magnesium levels, or any boost in training. However, they did note that the participants involved already had normal zinc levels.

The researchers concluded that further research was needed to determine if ZMA could benefit people with zinc deficiencies, different populations (females, untrained men, elders) or if greater amounts were needed to see any effects on already resistance trained men.

The following were taken from Amazon.co.uk, the only place where Elite ZMA seems to be sold.

As a rule, ZMA seems to be mostly well-tolerated. However, it has been linked to some side effects, such as snoring and sleep apnoea. Serious side effects reported also include cardiovascular symptoms, caused by an overproduction of red blood cells due to the anabolic effects of ZMA.

Elite ZMA is not recommended for anyone under 18; anyone already on medication or suffering from a medical condition should consult their doctor before taking. As with any medication, pregnant or lactating women should first consult their GP, though testosterone boosters are not recommended for women. Women who take ZMA may suffer from increased aggressiveness and body hair.

Elite ZMA should only be taken once a day (one capsule a day), preferably on an empty stomach 30-60 minutes before bed. Do not take with diary or any other foods or supplements containing calcium.

Even leaving aside the issue of free products for reviews seen on Amazon, by far the majority of Elite ZMA users seem very happy with it. The majority of research does suggest that it should work, albeit it might not if you already get all of the zinc and magnesium that you need from your diet. If you are deficient, however, there’s no reason not to assume that you should see noticeable results from it.

ZMA is one of the most popular natural ingredients in testosterone boosters, and Elite ZMA seems to offer an effective branded supplement of it. If you think you might be deficient in zinc and/ or magnesium and want to improve your sleep and muscle recovery, it is probably worth trying. If you believe you have enough of the minerals in your diet, ZMA will probably be next to worthless for you.