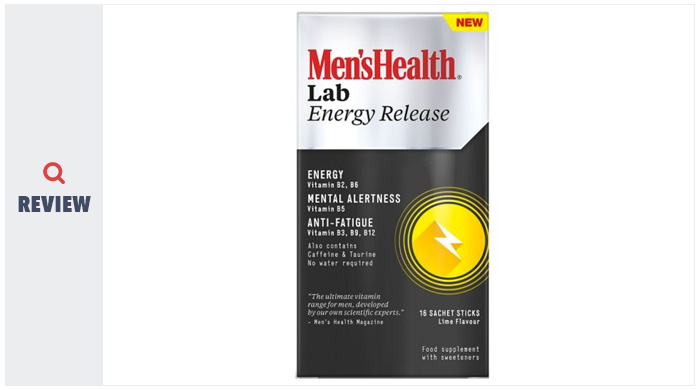 The most popular monthly men’s magazine in the UK, Men’s Health, has released its own branded multivitamin range.

Developed in partnership with Omega Pharma and released under the name Men’s Health Lab, the range of vitamins aims to support your body and mind, whatever your goal or physique. The manufacturers describe it as the ‘ideal range for men with an active lifestyle’.

It is estimated that most men are deficient in nearly every nutritional category apart from iron, which is why credible men-only formulations tend to be low in the latter (the body struggles to get rid of excess iron) but strong in other nutrients.

Here we will review the Men’s Health Lab Energy Release supplement, described as an instant ‘pick-me-up’.

Taurine (300mg): Taurine is the biggest ingredient in Men’s Health Lab Energy Release, with 300mg compared to 60mg of caffeine. Taurine is an important amino acid commonly used in energy drinks and helps to support both neurological development and control the levels of minerals and water in the blood. It is present in practically every tissue in the body and while we can make enough ourselves, supplementation may offer numerous health benefits. It is also considered safe at relatively high levels (up to 3,000mg a day).

Does it work as an energy booster? Its inclusion in energy drinks suggests so, but this may be a fallacy. According to the Mayo Clinic, some studies suggest taurine may help to improve athletic performance. Others suggest that it can improve mental performance when combined with caffeine. Both of these findings, however, are somewhat controversial, with the integrity of the claims uncertain. The majority of experts instead claim that taurine doesn’t do much for energy directly, though it may aid in memory, concentration and mood.

Caffeine (60mg): Caffeine is a popular stimulant that helps to give you a quick boost of energy. At 60mg, this has less caffeine than a normal 8oz cup of coffee (which usually contains about 100mg of caffeine). Caffeine is another popular ingredient in energy drinks, though usually at much higher levels than this. Safe caffeine limits are usually up to 400mg per day for healthy adults, according to Consumer Reports, as quoted in WebMD .

Other ingredients include the B vitamins:

Anyone deficient in B vitamins will feel tired as the vitamins help to turn food into energy. A vitamin B shortage can also cause anaemia, which inhibits the oxygen supply to your organs, triggering further fatigue.

However, according to Louisiana State University’s director of dietary assessment and nutrition counselling, Catherine Champagne, Ph.D., R.D.N., most people are NOT deficient in B vitamins, with a healthy varied diet providing plenty of each (an exception is B12 and people on a plant-only diet).

As one esteemed health magazine concluded:  “The jolt you get from energy drinks comes from caffeine, and maybe sugar. But as for those B vitamins? It’s just marketing, says Champagne.”

That said, Men’s Health Lab Energy Release is not a traditional energy drink (though it shares many of the same ingredients) and B vitamins are important for a host of processes in the body, not just energy. Men’s Health Lab also says the vitamins fight fatigue and aid mental alertness, which could be true.

All reviews comes from Amazon UK 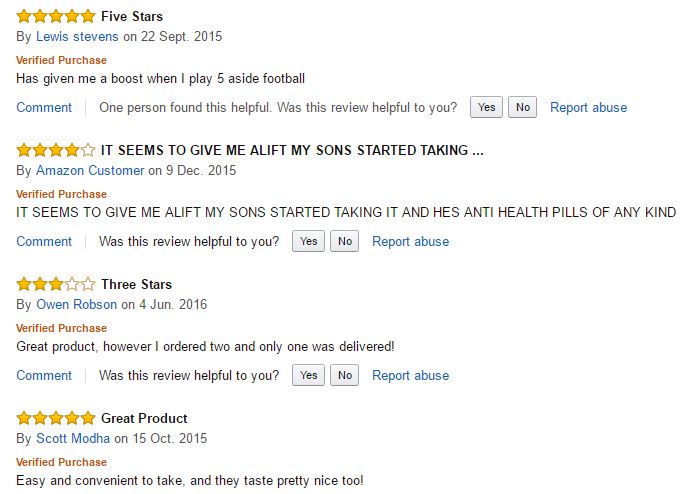 Take one sachet twice a day maximum. The sachets can be poured directly into the mouth with no need for water.

Note that excessive consumption of Men’s Health Lab Energy Release (a recommended dose is two sachets per day) can cause laxative effects.

This product contains caffeine and is not recommended for pregnant women or children. It also contains wheat, a potential allergen.

It’s hard to determine the success of a new product when it doesn’t have many user reviews (only four that we can find so far). The reviews we have seen, however, have been cautiously optimistic. While it doesn’t seem to offer a full-on bolt of energy, happy users do report that it gives them a ‘lift’.

Men’s Health is one of the leading male health-related brands around the world, so it makes sense that they’d aim to transfer their popularity into other health related side-lines.

Early reviews of Men’s Health Lab Energy Release suggest that it does give a subtle lift, if not a continuous or intense energy boost. Having investigated the ingredients, we’re more likely to think any energy lift comes from the caffeine and sugar included, as opposed to additional B-vitamins. After all, Men’s Health magazine says the exact same thing!

That said, B-vitamins are useful and supplementation is beneficial to anyone with a poor diet who is deficient. Men’s Health Lab Energy Release is also a healthier alternative to sugar and caffeine-laden energy drinks, though it may not be as powerful.