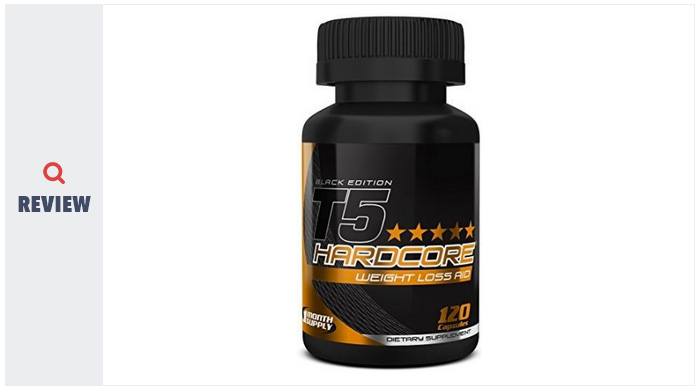 According to the manufacturer eBody, T5 Hardcore is aimed at everyday people who want to lose weight, as well as boxers, bodybuilders and athletes who want to strip body fat without losing muscle. That said, eBody also describes it as the ‘strongest ever and most powerful T5 fat burner at this time.’

You know that you should be onto a winner if Men’s Health review your fat burner and state that ‘By day 21 I’d already lost 6lb and an inch off my waist.’ Edward Lane, Assistant Digital Editor, Men’s Health.

But is all as it seems? Does T5 Hardcore deliver results in a way that is easy to use, effective and safe?

The key active ingredients in T5 Hardcore are bitter orange (500mg), green tea extract (400mg) and caffeine anhydrous (150mg). This, says eBody, provides the ‘strongest legal equivalent’ to the popular ECA stack, which stands for Ephedrine, Caffeine, and Aspirin. Ephedrine is now banned for use as a weight loss supplement after a meta-analysis of collected studies showed ephedrine and ephedra could double or triple the chance of heart palpitations, stomach problems, autonomic symptoms or psychiatric problems.

Manufacturers have been looking for legally acceptable alternatives to ephedrine and ephedra ever since, but does legal automatically mean safe? Not necessarily. We have some reservations about certain ingredients in this stack.

The key ingredient in bitter orange is synephrine, a popular alternative to ephedra, banned in 2004 by the U.S. Food and Drug Administration as mentioned above for heart-related side effects. However, synephrine also stimulates the heart, especially when mixed with caffeine, and can cause high blood pressure in healthy adults. As WebMD points out, there is no evidence that synephrine is any safer than the banned ephedra.

The following reviews present a cross-section of views on T5 Hardcore on Amazon UK.

The Men’s Health reviewer, while happy to be losing weight, also described feeling ‘grim’ during the entire 28 days he took the supplement. His heart was beating very fast, and he describes feeling ‘on edge during office hours’ and crashing out in the evening. Other reviewers, however, state that they experienced no crash so it may depend on your metabolism. One person complained of pains in the back caused by kidney problems after using T5 Hardcore.

Not recommended for anyone under 18 or pregnant or nursing mothers. Take medical advice if you have food allergies, or are already under medical supervision.

Take two capsules a day on an empty stomach with water; ensure you take the capsules six hours apart, and don’t take four hours before sleep. Drink eight glasses of water a day at least. T5 Hardcore pills, with 1600mg per serving, are said to be very potent and to work within one hour.

The key ingredients in T5 Hardcore are bitter orange, caffeine anhydrous and green tea extract (which also contains caffeine). There’s no denying that this is probably a very powerful fat burning combination for most people. From user reviews, it also seems to be an effective appetite reducer and potent energy-giver as well (thanks to the caffeine).

However, the reports of hearts beating fast, jitters and crashing make us worry about this product, and it’s likely too strong for some people. Even then, however, it won’t take long for the body to get used to it, and weight loss may eventually plateau.

We wouldn’t recommend these pills. We distrust the synephrine in the bitter orange in particular. If you are set on trying T5 Hardcore, however and we can’t dissuade you, we would advise you to use it only as a short-term intense weight loss and fat burning boost. It may help to kick start your weight loss and fat-burning efforts, but the pills are not advisable for long-term use.