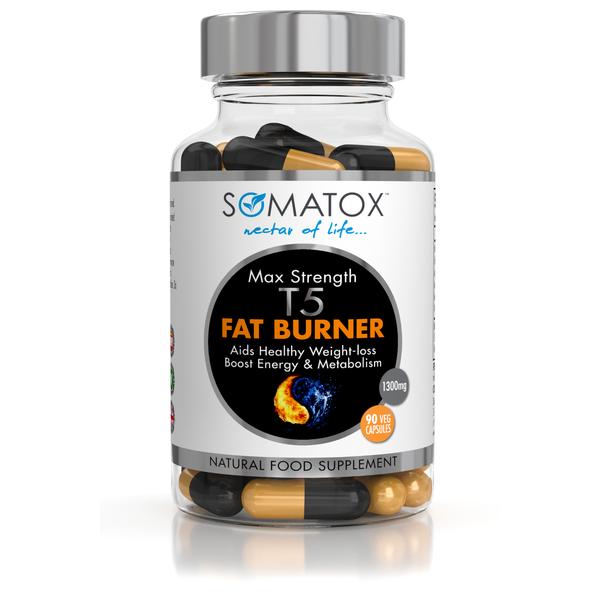 Sometimes a supplement has such good ratings on Amazon UK that we’re disappointed when it turns out to be, in our opinion, undeserved.

Somatox T5 Fat Burner is a 100% natural fat burner manufactured by Somatox, a British company specialising in detox and weight loss products. With no artificial ingredients, fillers or binders, it sounds like a promising weight loss solution when we first heard about it. It is also manufactured in the UK, which we can only approve of.

With excellent ratings on Amazon UK, we had to see for ourselves if Somatox T5 Fat Burner lived up to its hype, so we took a closer look at what is inside…

How Does it Work?

Somatox T5 Fat Burner acts by stimulating the thyroid hormone production, which in turn increases your metabolic rate and your body’s ability to convert fat into lean muscle mass. Somatox also includes ingredients to boost your energy levels throughout the day, keeping you more active and helping you burn even more calories. 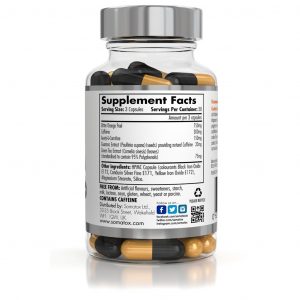 This is where our first concerns arise. Bitter orange is a popular ingredient when it comes to weight loss, but it remains highly controversial. Although it has been used as a medicinal supplement for centuries, notably to treat conditions like stomach pains and constipation, its safety is still questioned when used for fat burning purposes.

As is its effectiveness. Bitter orange is used in Somatox T5 Fat Burner for its synephrine, an active ingredient with similar effects to the banned ephedra. Some studies have suggested it can be effective in weight loss (other studies have disagreed) but it can also provoke significant side effects such as elevated blood pressure and heart rate.

Examine.com recommends a daily synephrine dose of no more than 10-20mg, taken two or three times a day. It’s not clear how much synephrine is included in Somatox’s T5 Fat Burner – as the synephrine content of bitter orange products varies considerably and the company doesn’t say –  but a 750mg dose of bitter orange does suggest a potentially dangerous dose of synephrine.

Caffeine is definitely a favourite when it comes to weight loss products and is used a stimulant  in a large majority of them. Caffeine helps increase metabolic rate, spark thermogenesis and  boost energy levels.

We wouldn’t advise any more caffeine than this. The fact that it is spread out during the day should help to reduce potential side effects – jitters, insomnia, nausea – but people sensitive to it should beware. Make sure to also watch your other caffeine sources while taking this product.

In theory, however, using ALCAR for fat burning should work well. After all, its primary role is moving fatty acids into mitochondria, providing more fuel for energy and encouraging the burning of fat stores.

Unfortunately, theory doesn’t seem to become reality. Studies on Acetyl L-Carnitine’s fat burning potential in isolation do not show very good results. Instead, any fat loss experienced when using ALCAR is typically attributed to the additional exercise and improved activity that people do following on from its energy boost.

Bear in mind too that the standard dose for ALCAR is between 500-2000mg per day. Somatox T5 only contains 150mg, so the dosage may be just too small to have any impact at all. It would be hard to ascertain whether any energy boost experienced comes from the caffeine or from the ALCAR.

In Somatox T5 Fat Burner, guarana extract is used as an alternative, natural source of caffeine for increased energy and a higher metabolic rate. It is a bean from South America that naturally contains more caffeine than coffee beans. Note that it is not a fat burning compound.

Dosage has been kept relatively low in this supplement, presumably to remain safe when combined with other stimulants. This may potentially render guarana ineffective. While there is no established optimal dose for guarana, Examine.com recommends taking between 50g-100mg a day.

Green tea extract is also an amazing fat burning ingredient. It works by raising the levels of norepinephrine, also known as the fat burning hormone. It works best when combined with regular exercise.

Evidence for green tea’s fat-burning properties demonstrates that it only kicks in at high quantities. We would rather have skipped the guarana and upped the green tea dosage.

The following reviews come from Amazon UK. Click to enlarge. 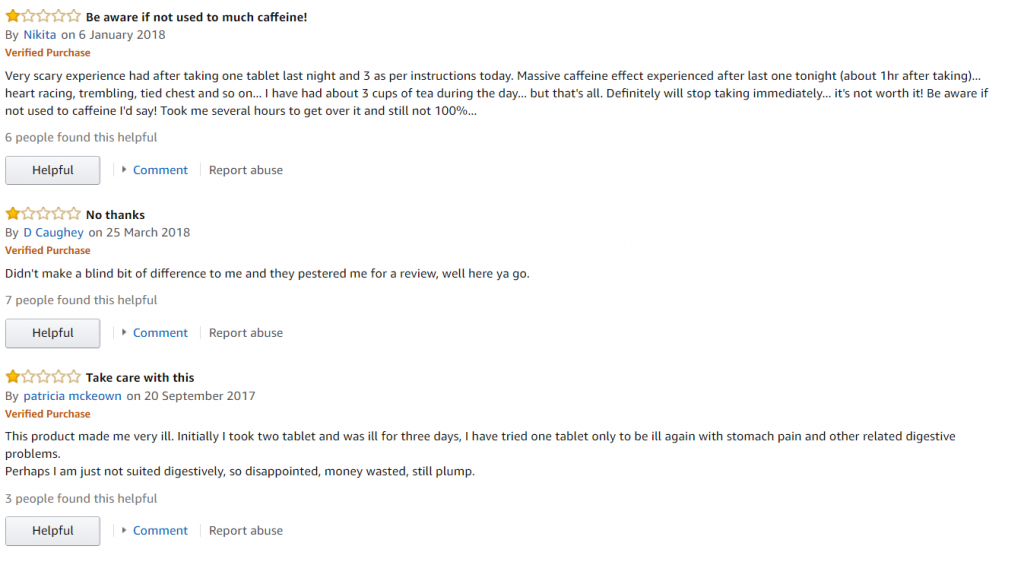 Bitter orange, either on its own, or with caffeine or other stimulants can potentially increase your risk of heart attack, stroke, high blood pressure, fainting, and headaches (migraines and cluster headaches have been reported in some people). Mild nausea may also be a risk, as can an increased sensitivity to the sun.

Take one capsule, three times a day with a glass of water, 30 minutes before your meal.

Somatox T5 Fat Burner is useful for everyone who wants to lose weight, athletes and others, while using a quality, all-natural product.

We’re torn about Somatox T5 Fat Burner. While we don’t take our lead from Amazon UK, it’s hard to ignore the fact that it is very popular; indeed, it is the second best-selling fat burner on the site at the time of writing. Feedback also suggests it’s effective for weight loss too. Nearly 80% of users (granted, not all verified purchases) give it 5 stars. Genuine users do seem to like it a lot.

But here’s the thing. We can’t help but be concerned by its apparent disregard for safety. Bitter orange may be effective (again, the science is still on the fence) but there’s no doubt that it comes with a host of potential health issues. They may only seem to affect a minority of people but those that do complain warn of racing heart rate, chest pains, headache, and digestive problems.

Such a high caffeine count as well also seems to cause issues, and the two combined… well, that’s why we can’t in good faith recommend Somatox T5 Fat Burner no matter how popular it seems to be.

One to avoid, in our opinion. It’s just not worth the risk.