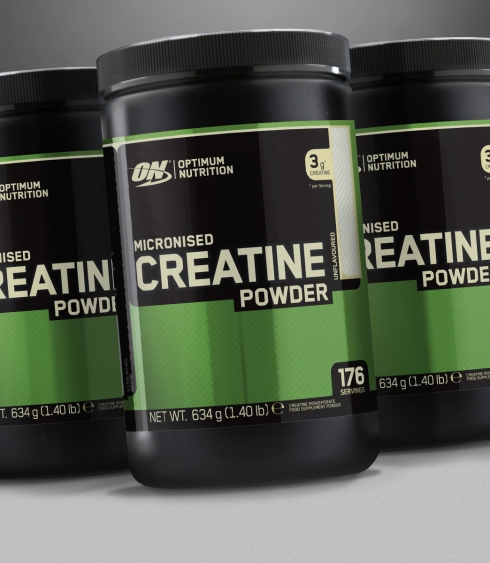 Creatine is a naturally occurring peptide molecule that already exists in your body and forms part of any omnivore’s diet. You can get creatine from beef, pork, chicken and fish.

In the world of fitness and bodybuilding, creatine is essential to produce the explosive muscular contractions you need to perform when working out. It is also thought to encourage lean muscle mass, and Optimum Nutrition’s Micronized Creatine Powder is a great way of getting it.

Creatine acts on another molecule in your body called Adenosine Triphosphate (ATP), the basic form of energy in your cells. Unfortunately, the body can only store enough ATP in the body for up to 10 seconds of high intensity exercise, therefore the body must create new ATP in order to continue. That’s where creatine supplementation comes in, helping to make more ATP and providing your muscles with greater potential to generate explosive power.

It is also thought to aid recovery post-workout and many users report being able to train more often and more effectively as a result of this. Optimum Nutrition is one of the leading brands in the supplement space, so we expected a lot from its Micronized Creatine Powder. So, does it deliver? Let’s look and see…

The ingredients list is short but sweet – 99.9% pure CreaPure® creatine monohydrate. No sweetener, flavouring or other ingredients at all. All killer, no filler. The fact that this product offers only micronized, high quality creatine – very fine particles of creatine – means that it is absorbed very quickly into your body.

The main component, Creapure® creatine monohydrate is one of a few different types of creatine available but is the only one that research has reliably shown can increase muscle mass, strength and recovery in many different types of athlete. From younger competitive sports players to more experienced resistance trained individuals, creatine monohydrate has repeatedly shown itself to be fast acting and highly effective.

Creapure® is the industry gold standard for creatine monohydrate products. It is produced at a propose-built, state of the art facility in Germany by AlzChem Trostberg GmbH. It is vegan, Kosher and Halal. Every batch is rigorously tested and approved before being sold, so Creapure® contains almost none of the substances that you may find traces of in cheaper alternatives. These include steroids, other banned PEDs or illegal drugs. Seeing the Creapure® seal of approval on a product means you are buying quality. 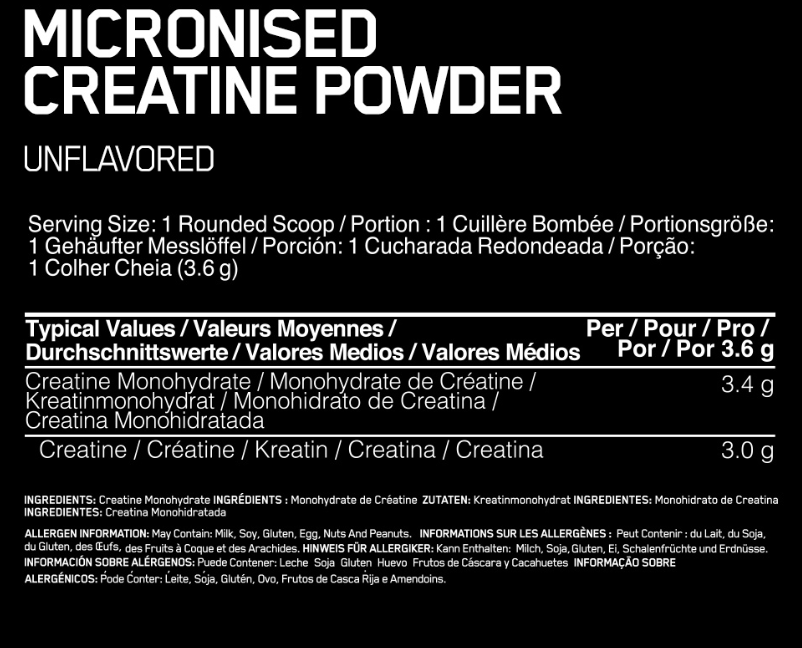 All reviews are taken from Amazon UK. Click to enlarge 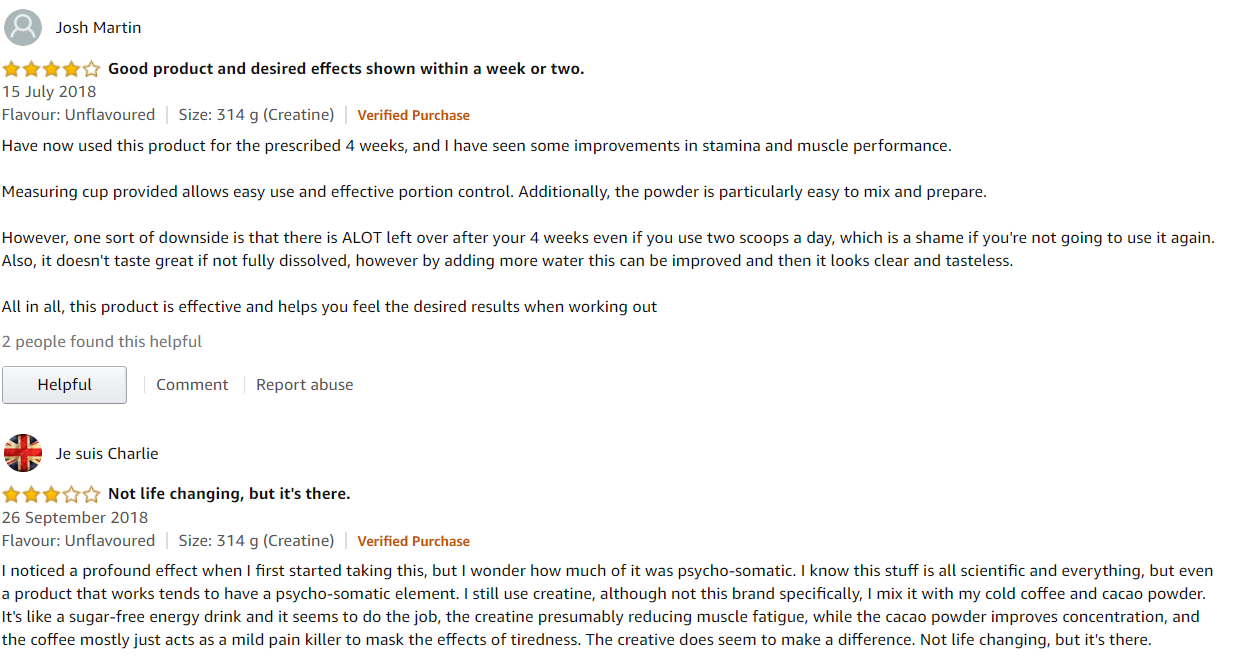 Creatine has a shorter list of potential side-effects than most other supplements available but it is not without its risks. Because creatine draws water in to your muscles, ingesting large amounts can lead to dehydration and symptoms like dizziness or nausea. It is important to drink lots of water when taking a creatine supplement, as much as 4 litres a day.

Creatine by-products are processed via the kidneys so The Mayo Clinic do not recommend using creatine if you have a history of kidney problems or a condition that could lead to kidney problems, such as diabetes.

Finally, some users report that they experience more serious side-effects from using creatine products such as fever and gastroenteritis but these are normally associated with other forms of creatine that take longer to absorb.

The Optimum Nutrition website recommends mixing one rounded teaspoon of Micronized Creatine Powder with water or juice or adding it to your pre or post-workout shake. Beyond that, it does not give any further directions on how best to take the product.

However, creatine products, and particularly creatine monohydrate products, should ideally be taken in larger quantities during the first five days of use (the ‘loading’ phase) and then in smaller quantities daily.

For Optimum Nutrition Micronized Creatine, this translates to 14.4g of powder (which translates to 13.6g creatine monohydrate) per day split over four servings, one with breakfast, lunch and dinner and the last one just before bed, followed by one serving per day thereafter. There is no cycling required with creatine after the loading phase.

There are different schools of thought on when is the best time to take your creatine. Some people advocate a pre-workout creatine boost, others prefer it post-workout. Some people don’t think it matters at all, what matters is you just get it in you. Arguably, your goal when taking creatine is to improve your body’s overall level of phosphocreatine and ATP so timing shouldn’t matter that much. To avoid getting confused by all this, just take it before you exercise; that’s considered to be the best time by a small majority.

As we mentioned, creatine has been shown to have a positive impact on performance for all sorts of people so it is thoroughly deserving of a place in anyone’s supplement regime. In particular, if you are following a bodybuilding or resistance training programme then creatine will be particularly useful. Many customers on Amazon UK report noticeable differences in a matter of weeks, whether it is being able to squeeze an extra couple of reps onto the end of each set or how much faster they find they recover from a workout.

Other than those looking to gain mass and strength, creatine can benefit you if you are training for a sport that involves explosive movement like basketball, rugby or tennis; combat sports such as Muay Thai, Boxing or BJJ/MMA, or if you are following a more practical strength programme like CrossFit.

The vast majority of scientific evidence suggests that, yes, creatine does work and is in fact one of the most effective ways to build muscle, gain strength and recover faster from exercise.

What’s more, it is a very cost-effective way to enhance your training and, of all the products available in the market, Optimum Nutrition Micronized Creatine Powder is one of the purest and highest quality you can get. The smaller serving size may put some people off, but you’re unlikely to notice a massive difference given the quality of the product.

You can buy Optimum Nutrition Micronized Creatine Powder from the official ON website or Amazon UK.