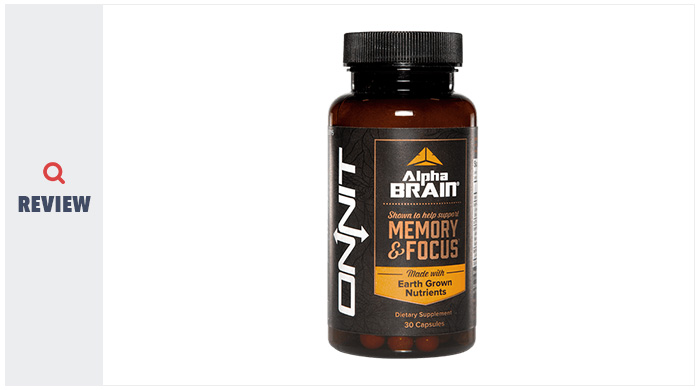 There aren’t many nootropic stack products that are backed by human clinical trials, so the fact that Alpha Brain has two behind it makes it stand out from the crowd. It’s certainly a popular product, having sold more than 34 million capsules to date.

Manufacturers Onnit says Alpha Brain is clinically studied to help ‘memory, focus and processing speed.’ The human trials, held by the Boston Center for Memory, seem to suggest Alpha Brain can boost verbal memory, alpha brain waves (generating a relaxed alertness), and cognitive processing speed. Let’s take a look at its ingredients to see how it can achieve that…

The Onnit Flow Blend tackles stress and includes L-Theanine, known to boost Alpha brainwaves to create a feeling of relaxed awakening, and Oatstraw, which does something very similar. It also includes another one of our natural nootropic favourites, L-Tyrosine, which gives a boost to brain power particularly when stressed or sleep-deprived, and rounds it out with Phosphatidylserine, which helps to create new neurons and thus boost memory. This mix accounts for 650mg of the supplement.

The Onnit Focus Blend (240mg) includes both Bacopa monnieri and Huperzine A, both powerful nootropics. Bacopa acts as an antioxidant, protecting neurons from damage, as well as improving memory retention, restoration and formation. Huperzine A is very potent, and helps to maintain levels of the vital neurotransmitter acetylcholine in the brain. This in turn aids focus, memory, reasoning and learning. The final ingredient in the Onnit Focus Blend is a choline supplement, Alpha GPC, which also boosts acetylcholine levels. It optimises the brain, boosts memory, mental processing, attention span and speed of thought.

Finally we have the Onnit Fuel Blend (65mg), a combination of Pterostilbene and Vinpocetine. The former is an antioxidant that can promote new neural connections, while the latter increases blood flow to the brain, bringing fuel. Vinpocetine is often prescribed to delay the onset of dementia in patients around the world. There is one last ingredient in this blend, L-Leucine; however this is not a recognised nootropic so we don’t know what it is doing here.

We can’t really give you a definitive view on AC-11® as very little is currently known about it, other than certain studies do support Onnit’s claim that AC-11® can repair DNA. Whether this results in significant cognitive benefit, however, is yet to be demonstrated.

AC-11® is backed by vitamin B6 (10mg), a nootropic ingredient which helps to boost long term memory and protect neurons.

The following reviews are taken from the official Onnit website:

The following are on Amazon.com, where Alpha Brain has a 3.3 rating out of 5 after 739 reviews.

Onnit has sold more than 34 million capsules of Alpha Brain and there are few reports of any side effects. The fact that it does not contain caffeine is a bonus, and all the ingredients within the supplement are generally considered safe. Some users have, however, reported mild headaches.

Onnit advises you to consult a doctor before taking if you are pregnant, nursing, take any medications or have or suspect a medical condition.

For improved mental performance, Onnit recommends taking two tablets in the morning or early afternoon, ideally with a light meal. To enhance your dream state, take them instead four to six hours before sleep. Never take more than three capsules in 24 hours

Does Alpha Brain work? Thirty-four million capsules sold would surely suggest it does. As do numerous reviews on the internet, and two clinical human trials (caveats above aside).

Editor’s Note: On a personal note, I used to use Alpha Brain until Mind Lab Pro came along, and it worked for me. I noticed a definite improvement in my motivation and focus, and discovered I had more mental energy to face the day. As promised, it boosted my verbal memory, focus and concentration; the results just weren’t as pronounced as they are with Mind Lab Pro.

Alpha Brain uses solid and effective nootropics in its blends, and may have a secret weapon in AC-11 should further research prove its effectiveness. It’s just a shame that while the manufacturers are obviously committed to creating an effective product, it still feels the need to hide behind blends that obscure individual dosages. We do have to give Alpha Brain props, however, for resisting the lure of caffeine and for the (albeit small) human clinical trials.

The majority of customers for this product seem very happy with it, and so this is one nootropic stack that we are pleased to recommend.

You can buy directly from the Onnit website, or buy Alpha Brain from retailers like eBay and Amazon. It is also available at the Vitamin Shoppe. It does not seem to be available at GNC as yet.